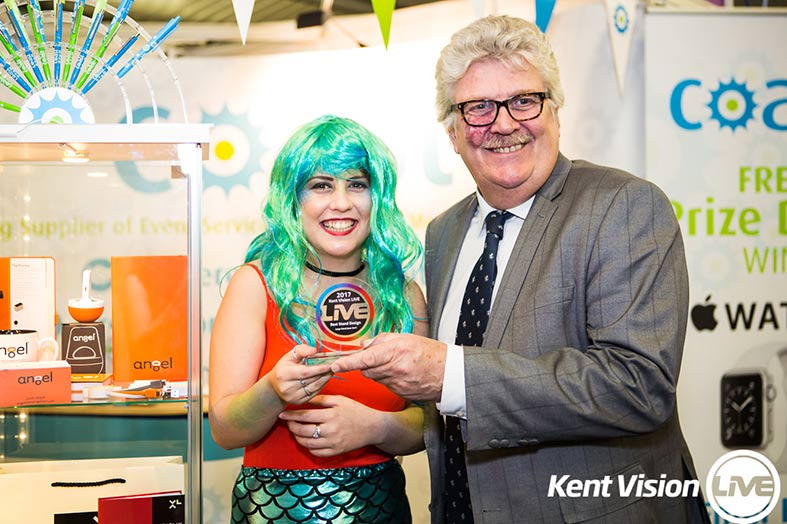 One of our highlights at Kent Vision LIVE is seeing the creativity and effort that exhibitors put into their stands.  A stand that captures visitor’s attention and engages them is key to making the most of an exhibition. It is for that reason, and to recognise the hard work that goes into many of the stands, that we have awarded a ‘best stand’ prize for some years.

But over the years it has become increasingly difficult to narrow down the field to just one stand. So, this year we decided to extend the award to three categories—stands up to 6sqm, stands over 6sqm and the best interactive stand.

Of course, the standard this year was as high as ever. In the over 6sqm category, there were several exhibitors that stood out. The Kent Event Centre, our hosts for the day, had once again done a fantastic job of creating an attention-grabbing stand that brought the outside inside and reflected the diversity of their offer. The team from Hadlow College had built an incredibly creative stand that also did an excellent job of showcasing their growing portfolio.

However, the award for best stand over 6sqm went to Coast Promotions. They had created an incredibly eye-catching stand that was well dressed and difficult to pass by without stopping. But they clincher was how they engaged the delegates. A day at any exhibition is always a test of stamina. But doing that dressed as a lobster, or indeed a mermaid shows real dedication. It was clear their approach made a real impact, and they were a worthy winner.

In the under 6sqm category, the standard was equally high. Kent Country Parks had clearly put in a lot of effort, turning their stand into a little piece of the countryside; while the Hideout and Loud Monkey had both completely transformed their space and were standing out from the crowd as a result.

It was incredibly tough to pick out a winner, however, in the judge’s opinion, Lemon Creative took the category win. Their design, and in particular their use of colour, showed the impact a stand could create. The overall feel of the stand was uncluttered, and yet it did an excellent job of showcasing their work and capabilities. And the response to news of their win on social media demonstrated it was a popular choice.

The final category was also hard fought. Engaging the attendees is critical at any exhibition, and we saw some highly creative approaches. Visitors with a sweet tooth were once again well catered for. KM Facilities Management were thrilling their guests with a close-up magician on the stand. There was a casino on the HR Go stand and Allteks were drawing in customers with the chance to experience Virtual Reality.

There was one stand that stood out, however; Corinthian. Every time we passed their stand it was busy; thanks to their Crystal Maze themed game. If you have never seen the Crystal Maze, at the end of the game the contestants had to collect as many golden tickets as possible while inside a dome where a fan was blowing the tickets around. Replicating this on their stand became a real talking point. It was fun, and they included an element of challenge as delegates competed to see who could collect the most tickets. And so Corinthian was the standout winner of the Best Interactive Stand.

We would like to thank Mark Dance, Cabinet Member for Economic Development at Kent County Council, for his help in judging the stands. And of course, we would also like to thank everyone that clearly worked so hard to create such an amazing collection of stands. We can’t wait to see what you all come up with next year!

If you are exhibiting at Kent Vision LIVE 2018 and would like to talk to us about how to make your stand one that people can’t miss or pass by, please get in touch. Who knows, you may be one of next year’s winners.

Chris is an associate of the Kent Vision LIVE team and director of G and C Media Ltd. When he's not helping the team shape and deliver the largest B2B event outside London, Chris is helping publishers and SMEs create and deliver content that gets results.

Your guide through Brexit
11th January 2019